How Are Diamonds Formed?

The reason we adore diamonds so much is partly due to their rarity, but also partly due to the natural qualities they have that give them the beauty we appreciate so much. This beauty is the result of thousands, if not millions of years of work that turns carbon into the hard, reflective material we know today.

Historically, diamonds we at one point only found in India, where trading began in the 9th Century BC, but since then, diamond deposits have been discovered all over the world, from South America to Africa.

The diamonds that were mined in 9th Century BC and the diamonds that are mined today were all created roughly around the same time, when the Earth was first cooling from its early days as a molten planet, before the first speck of life had even began. Many people assume that diamonds form from coal, but that’s a common misconception.

In this blog, we’ll be answering the question ‘How are diamonds formed?’

Here at Diamond Expert, we’ve put together a number of in-depth reviews of some of the world’s best and most well-known diamond retailers. We would recommend reading our reviews of Whiteflash, Blue Nile, and James Allen.

In Detail: How Are Natural Diamonds Formed?

A diamond is a crystallized carbon structure that usually began its life when something known as a C-O-H-N-S fluid dissolves minerals in rock and replaces them with other ones. This is known as a metasomatic process, and diamonds are formed from these fluid deposits by either changes in carbon or methane. All happens in the Earth’s mantle, a layer of silicate rock that sits between the Earth’s core and its crust.

Over time, these deposits will be subject to the heat and pressure that comes from tectonic processes—the movement of the Earth’s mantle—which will form them into the precious gems we mine today. The heat will be around 2,000 degrees Fahrenheit, while pressure exceeds 725,000 pounds per square inch.

What these environmental pressures will do is take a substance, such as graphite, and alter its molecular structure. Graphite has a hexagonal molecular composition, which will be changed into a triangular one, resulting in a diamond.

After diamonds are formed, they are still embedded deep down in the Earth’s mantle. However, over time, as our planet’s surface has shifted and changed, volcanic eruptions have brought large amounts of those deeply deposited rocks up to the surface, scattering them for miles or concentrating them in one location, which is why we have specific areas known for their diamond deposits.

These eruptions are carried out by deep-source volcanoes, which begin three times as deep as the volcanoes we usually find on the Earth’s surface. Diamonds are brought to the surface through kimberlite pipes, forced upwards in magma by concentrated levels of magnesium and carbon dioxide. Within these eruptions, precious gems such as peridot and garnet are also found.

Diamonds can also be found in space. In meteorites, around 3% of the carbon within their bodies will be made up of nanodiamonds. On Neptune and Uranus, high pressure condenses methane in the atmosphere into diamonds, which results in diamond rain. It has also been hypothesized that some extrasolar planets will be made entirely from diamond. 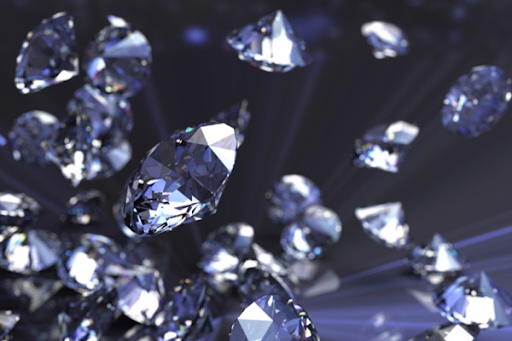 We also find diamonds from space here on Earth. When meteors and asteroids impact the Earth, as they have done for millions of years, they bring with them diamonds that are deposited in the impact site. These are usually not found to be gemstone quality (which is determined by robust grading), but because of their strength are utilized in cutting or in other industrial purposes.

How Are Synthetic Diamonds Formed?

Natural processes are not the only way to create diamonds, which can now be made with human hands and a little help from modern technology.

While a diamond purist may not like the idea of a synthetic diamond, they actually are identical to natural diamonds on a molecular level. It takes a trained gemologist with specialized equipment to tell the difference.

Today, synthetic diamonds are made by a process called Chemical Vapor Deposition (CVD), which involves adding a mixture of gases into a chamber and splitting them into chemically active atoms or molecules by superheating them with plasma, which then effectively ‘grows’ diamonds on a substrate.

While older techniques typically produced smaller diamonds, this technique has enabled some diamond material to be grown in areas of six inches in diameter or higher.

If you’re interested in purchasing synthetic diamonds, we’ve got the perfect guide for you to read.

However, if you’re looking to start shopping for real loose diamonds, you might be wondering where to turn too…

There is a vast array of physical and online retailers that you can purchase from. Many are reputable, with years of great service and countless fantastic diamonds on offer. Many aren’t so trustworthy, so it’s worth being able to sort the wheat from the chaff.

Here at Diamond Expert, we’ve put together a number of in-depth reviews of some of the world’s best and most well-known diamond retailers. We would recommend reading our reviews of Whiteflash, Blue Nile, and James Allen.

Metals for Jewelry: Platinum vs. White Gold vs. Yellow Gold vs. Rose Gold

Should I Buy a Diamond Online?